It’s late fall and the temperatures have felt more like mid-summer rather than the cusp of winter. It has been nearly 70 days since any measurable rainfall in Western North Carolina, wildfires are popping up over the region. Most started by deranged pyromaniacs/attention seekers, but the bone dry conditions act like vat of gasoline.

One place untouched by the fires has been the Great Smoky Mountain National Park. My friend and buddy from the Long Trail, Hangman got in touch about doing a backpacking trip prior to his next assignment in Charleston. The Smoky’s were the logical destination. I was stoked because he is a great backpacker and a blast to hike with in the woods.

The plan was tweeked and slowly grew to 50 miles over 3 days: Day 1: park at Newfound Gap and take the A.T. north 11 miles to Peck’s Corner Shelter, spend the night. Day 2: hike on the A.T. north to summit Mt. Sequoyah and Mt. Chapman, then hike Balsam Mountain Trail to Hyatt Ridge and Campsite #44 for a total of 19 miles. Day 3: hike to Enloe Creek and Hughes Ridge to return to Newfound Gap on the A.T. (20 miles).

The weather on Friday was beauteous. Temperatures near 70, sun shining, no smoke wafting in from fires elsewhere. Hangman and I started around 11:00 am and leisurely made out way north on the A.T. Stopping at Icewater Spring Shelter for a water fill up we encountered Sid. A snarky middle aged man with a biting wit, we laughed with him for a while. It was clear he was a serious backpacker. As day hikers streamed past the hut en route to Charlie’s Bunion, they stopped and looked at the shelter where Sid was sitting: “Is this the shelter?” asked one flip-flop clad fellow. “No, it’s just something I threw together to have a break.” They shuffled on.

As we joined the trail again we encountered a group of 25 guys from LSU out for a fraternized walk in the woods. I wouldn’t drink Bud Light from a coozie while hiking the A.T., but hike your own hike. They strode on loud and proud with techno music blasting from their phones. By the time we made it to Charlie’s Bunion, the young fraternity were busy guzzling booze and scaling the rock face, a wonderful mixture.

We hiked on. The trail from Charlie’s to Peck’s Corner is less traveled and we enjoyed the quiet trail with great views (below).

When we got to Peck’s it was a full house, all dudes. We said hello to the first older gentleman: “How’re you doing?” “I’m fine,” was the response and he simply walked away. Ok. The next group of two guys we saw we said hello, same thing. So Hangman and I did what we do best and just talked amongst ourselves. As we made dinner and ate, all the other guys just sat their in silence and didn’t talk, as if a imaginary teacher had commanded a silent lunch in the cafeteria. It was odd, because shelters usually are places full of conversation and quirkiness. At 6:00 pm everyone simply laid down and went to bed. Hangman and I stayed up for a while and talked, but it was clear this was not the night for the revelry we had anticipated.

Peck’s Corner is a wonderful shelter, but it is a .4 mile hike downhill from the A.T. and the water source was dry. I walked up to the ridge-line to get a ‘goodnight’ text through to my wife. I slept really well and the temperature didn’t get below 45 all night. 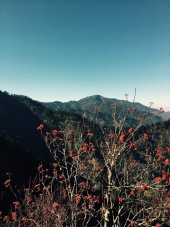 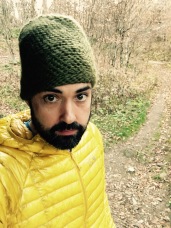 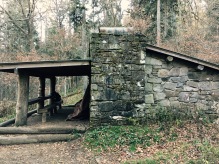 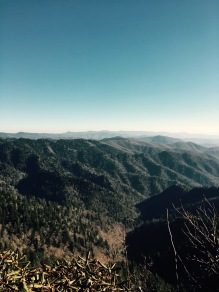 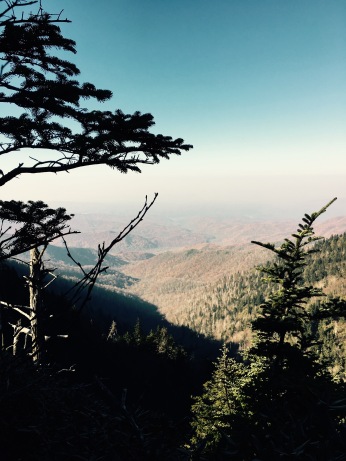 Day 2: Mother Nature Has Other Plans

I got up around 6:30 am and was in the process of cooking grits when the rain started. A cold front was swinging in, and off and on for an hour it rained. We hiked out from Peck’s at 8:00 and headed north on the A.T. Fog rolled in and created a Tolkien setting on the ridge. 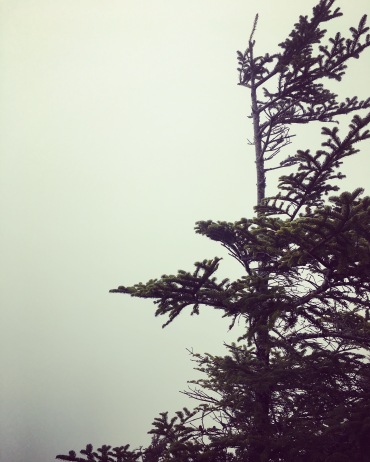 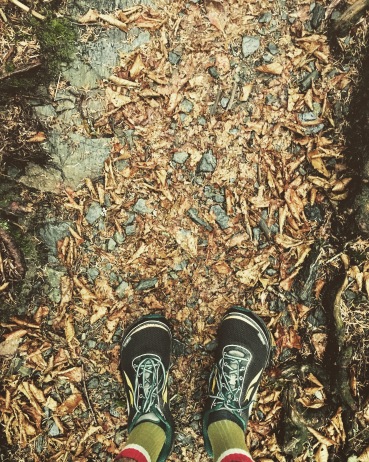 The second priority on this trip was to hike two more peaks as part of the South Beyond 6000 challenge. With only four left, I am almost done. These two were just off the A.T. near Tricorner Knob Shelter.

The summit of Sequoyah is 2.5 miles from Peck’s Shelter and 2.6 from Tricorner. Some say it is on the A.T., but I believe that it is located just west of the trail. You will notice a small quartz rock that has been placed at the summit (6003′). 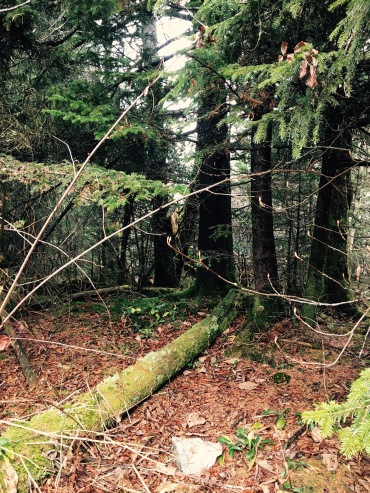 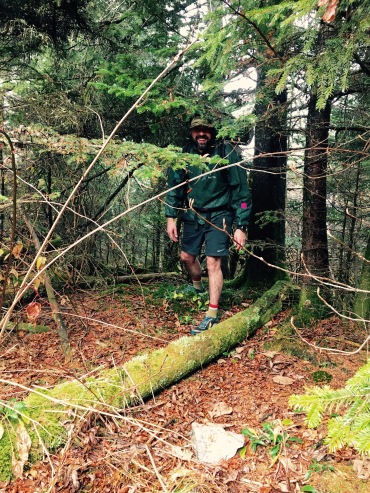 The manway to Chapman starts 3.9 miles from Peck’s Corner Shelter, 1.4 miles from Tricorner Shelter, or 1.3 miles from Mt. Sequoyah. The key is (if heading north) to look for a point where the trail swings to the east (right). The manway is located on your left before this turn (opposite if heading south). The 1/4 mile bushwhack is not marked, but is trodden down enough to discern the correct path. The summit was obvious and would have allowed a clear view if not for the weather.

start of manway to Mt. Chapman 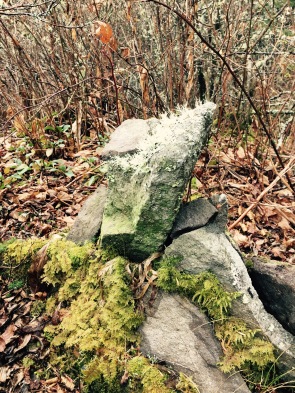 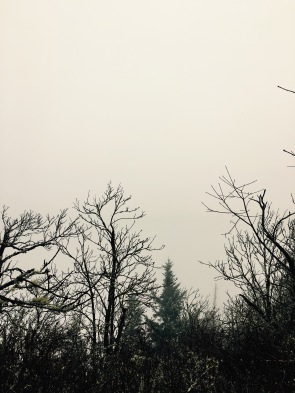 view from summit of Mt. Chapman

I rejoined Hangman, who was waiting on the A.T. The weather was really starting to turn cold. We headed to Tricorner and took a break, refilled on water and talked to a really friendly maintenance crew from Tennessee.

The weather grew crazy after joining the Balsam Mountain Trail, the wind blew at nearly gale force, the fog grew and as I looked up I saw that the morning rain had frozen to the trees.

Both Hangman and I agreed that the best course of action was to not push 12 more miles to campsite 44, but stop in the afternoon at Laurel Gap Shelter. It was only 11:00 and the windchill was in the 20’s.

The Laurel Gap Shelter was rebuilt two years ago and is quite nice. The water source is great and there are no problems with mice (yet). As we relaxed in the relative warmth of the shelter a group of 4 Auburn students out for 3 days came in. They had just started and still had 6 miles to go with only 1 hour of light left in the day. They were very friendly and we tried to talk them out of continuing on/warning them of the trail ahead.

After they decided to move on regardless our heed, another group of four came into the shelter. Their default leader walked up to us with a wide stride and took off his gloves. “Hello, I’m the Machine,” said the burly, grey bearded gentleman with snuff protruding from his lower jaw as he shook both of our hands. “It’s cold out there, isn’t it?” I asked back. “Nothing for the machine, though.”

As the afternoon and night progressed we learned that “Machine” could be used as a noun, adverb and verb. “I Machine up all the hills, nothing stops the Machine.” “The Machine is not always fast, it just never stops on the uphill.” The Machine is the sort of trail legend that you encounter and never forget. For hours he regaled Hangman and I with stories of the trails, the west and encounters in the wild. The other three with him were his sons and then the girlfriend of one of them, who all seemed as equally pleased with these stories as we were.

The weather continued to deteriorate and the gust reached 40 miles per hour. It was so cold that at 6:15 pm I looked at The Machine and he was getting into his sleeping bag. “Is The Machine turning in for the night?” “Yes, The Machine doesn’t work well cold!”

With the companionship of kind souls, the unfriendliness of the first day was completely forgotten.

Day 3: Let’s Get Off This Mountain

We awoke early to a frigid shelter. The temperature inside was 24, and the windchill outside was in the single digits. We woke up first and made breakfast. The Machine ambled outside and announced that he was up. I really enjoyed his company, but we had to head out.

Hangman and I discussed it, and given the temperatures, we decided to not hike back up to the A.T., but instead head to Smokemont, where we would hitchhike back to Newfound Gap. This shaved 8 miles off, but it kept us off the ridge were it would not get above freezing all day.

From Laurel Gap, we headed down Balsam Mountain Trail to Beech Gap Trail I and then Straight Fork Road and picked up Hyatt Ridge Trail, Enloe Creek Trail and eventually Chasteen Creek Trail. The hiking was steadily downhill for most of the day and it afforded warmer temperatures from the 40’s-50’s.

I was doubly happy to be outside and get so much time with my friend Hangman. He’s one of the best hiking companions I’ve come across and I really look forward to our next adventure. 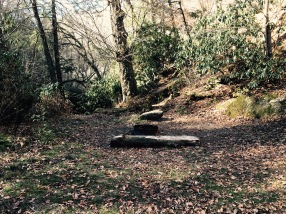 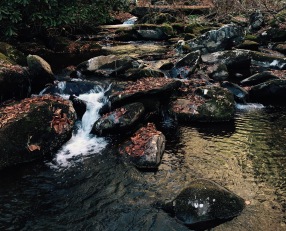 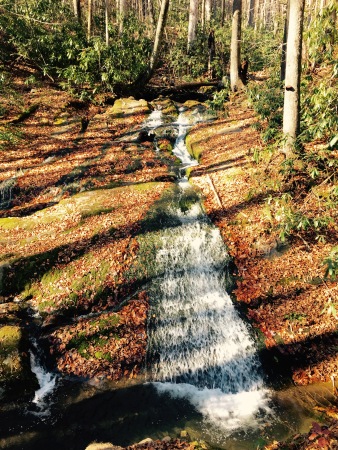